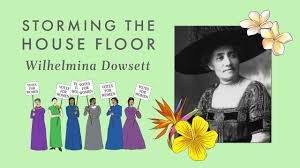 The daughter of a native Hawaiʻian mother of royal descent and a German immigrant father who was a coffee planter, Wilhelmina Kekelaokalaninui Widemann Dowsett campaigned for the rights of the women of Hawaiʻi to vote.

In 1912 Carrie Chapman Catt, who co-founded the National American Woman Suffrage Association, visited the Hawaiʻian Islands and spoke to women about suffrage. As a result, Wilhelmina Dowsett founded and became the first president of the National Women’s Equal Suffrage Association of Hawaiʻi. At the time, Hawaiʻi was a territory of the United States. (It became the fiftieth state in 1959.) Wilhelmina’s organization was the first local suffrage club. Because of the islands’ varied racial makeup, factions formed and dissension persisted. Some wanted to prevent Asian women from voting. Wilhelmina insisted all women, no matter their heritage, be included in women’s right to vote.

The group Wilhelmina founded insisted they be called “suffragists,” not “suffragettes.” The latter form had referred to British activists, which were viewed as militant and created a negative impression. Wilhelmina went door-to-door encouraging women to support their right to vote. Her enthusiasm inspired others to follow her lead.

At a 1913 meeting with local politicians, Wilhelmina told them, “I can speak for my Hawaiʻian sisters, and I can say that in every way the woman is man’s superior. She will not only cast her vote fully as intelligently—she will vote, honestly. There isn’t enough money in the world to buy her vote.”

Catt visited the islands again and spoke to the group in 1918. This motivated the women to become more active in their campaign for women’s suffrage. To promote suffrage, the group lobbied the U.S. Congress through their territorial representative. They also started grassroots groups to prepare women for the vote.

One obstacle to voting rights in the islands was the Organic Act of 1900. It prohibited Hawaiʻi from granting suffrage. However, this law was in conflict with the U.S. Constitution. In 1918 suffragist leaders from the mainland along with their Hawaiʻian counterparts supported an act granting Hawaiʻi the power to decide. When this act stalled in the Hawaiʻian legislature, Wilhelmina led five hundred women from all backgrounds and ages to the House floor with banners proclaiming “Votes for Women.” In the meantime Amendment XIX to the U.S. Constitution was passed, granting all women in the U.S. the right to vote.

Wilhelmina Kekelaokalaninui Widemann was born March 28, 1861 in Lihue, Kauai. On April 30, 1888 she married John “Jack” McKibbin Dowsett, the grandson of a British captain who had settled in Hawaiʻi in 1828. Royal family members attended their wedding at St. Andrew’s Cathedral in Honolulu.  Jack became a successful businessman and the largest shareholder of the Waianae Sugar Company. He also was involved in politics. The couple had three children: Herbert, Frank, and Alice.

Wilhelmina died December 10, 1929, ninety-one years ago today, in Honolulu at the age of sixty-eight. Her husband had died September 1, 1929.