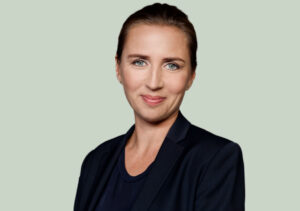 I don’t know of any American woman who dedicated her life from childhood to a career in politics as Mette Frederiksen of Denmark has done. Her father, Flemming Frederiksen, said in an interview, “She has been preoccupied with political matters since she was six/seven years old.”

When Frederiksen was 15, she became a member of the Social Democrats’ youth branch. She was elected to the Danish Parliament, the Folketing, in 2001 when she was 24 and named spokesperson for her party for media, culture and gender equality. The work she did there is probably why she received the Nina Bang Award in 2002, which is given to a woman politician in Denmark. When given the award, she is cited as showing political courage and enthusiasm and “impact with social feeling.” She has been leader of the Social Democrats since June of 2015 and in June 2019 became the youngest ever prime minister of Denmark.

Although Denmark is a monarchy with Queen Margrethe II reigning since January 1972, it is a Constitutional monarchy, so  the Queen has no independent political power. This Scandinavian country’s primary land mass is the peninsula of Jutland, which has a 42-mile border with Germany. The country is also comprised of more than 400 islands and has a population of a bit more than  5.8 million. The Faroe Islands and Greenland are part of the Kingdom of Denmark.