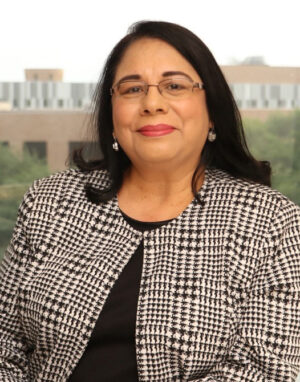 Luzelma Canales remembers the first time her father, who is a naturalized U.S. citizen, could vote. He came home waving the receipt for the poll tax he paid. They may not have had milk that day, but voting was more important. She says her father made sure she and her two sisters registered and voted. She has worked to instill that in others. “Getting people to register to vote is easy, but how do you get them out to vote? We found that the most effective way is to connect voting to the impact on their personal lives,” she says.

Dr. Canales, who lives in the Rio Grande Valley region of Texas, has organized partnerships with schools, hospitals, businesses, and nonprofit organizations, which have opened their facilities as polling stations. She emphasizes the principle she has followed her entire life:

Vote for officials who want to improve all aspects of the communities, such as the entities that are their partners.

“I want people to know that leadership at all levels matters,” she says. “They can leverage their standing in the community and influence thinking by creating awareness, making decisions, and through partnerships.”

Canales, associate vice president of leadership learning and activation at Branch Alliance for Educator Diversity in McAllen, Texas, has been a leader for numerous initiatives in Texas including:

While growing up, Luzelma Garza dreamed of being a truck driver. “I wanted to get off the fields,” she says, and laughs at remembering her childhood wish. It was real to her, though. She and her family were migrant farm workers. Discrimination was rampant, and as Mexican Americans they endured slurs and insults.

The family of five would leave La Grulla, Texas, in March every year and drive to the state of Washington to pick vegetables at large farms. She, her sisters, and her parents would rise at three in the morning to be at the fields by three-thirty. They’d pick crops until seven-thirty. The children would then head back to the barracks to clean up and be at the bus stop at eight so they could be at school at eight-thirty. When they weren’t needed in the fields in Washington, the family went to Oregon and stayed until October before driving back to Texas. “I’d go to three schools in one year,” Canales says.

The family migrated to the northwest to harvest crops until Luzelma was a freshman in high school. She says her parents encouraged her and her sisters to be entrepreneurs, so the sisters sold watermelons, bales of hay, and fireworks from their front yard.