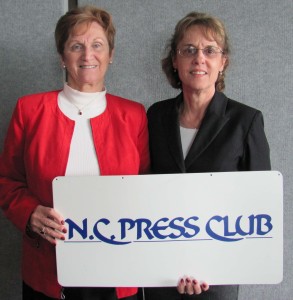 North Carolina Press Club reconstructed its Web site and has a new look at www.ncpressclub.com. It also developed a Facebook page at ww.facebook.om/ncpressclub. It has made these changes to meet the needs of professional communicators and is reaching out those new to these professions and those with years of experience to come and see who we are and what we offer.

NCPC realizes that in the 21st century the changes in professional communications have expanded to include more than journalism. Marketing, blogging, media relations, online newsletters, broadcasting and other forms of communication are careers for today’s writing professionals, and we welcome all of you.

The organization has an annual communications contest and are an affiliate of National Federation of Press Women, which chose to keep its name but welcomes male communicators.

Check out our Web site at www.ncpressclub.com and our Facebook page at www.facebook.com/ncpressclub, leave comments and tell us what you are looking for and how we can accommodate your writing interests.