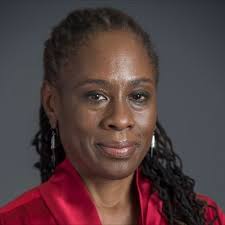 I didn’t know her name. I only knew she was black and her husband was elected mayor of New York City. Since she is one of the most prominent women in the U.S., I felt I should learn more about her.

Chirlane McCray, 61, is a voice for the excluded and marginalized. She understands that position because she grew up in white neighborhoods in Massachusetts. Her parents, both of whom worked, raised their three daughters to love books and learning, but Ms. McCray was always considered different from classmates. She experienced racism and bullying and used writing as a way to vent her anger.

She graduated from Wellesley College and worked at Redbook magazine then in 1979 she wrote “I am a Lesbian,” which was published in Essence magazine and considered groundbreaking. She became a speech writer for NYC Mayor David Dinkins in 1991 and met Bill de Blasio, whom she married in 1994. The couple has two children, Chiara, 21, and Dante, 18.

Ms. McCray projected courage and determination in her journey to rise above the intolerance she experienced, and now she works to eliminate intolerance and make resources available to all NYC residents.

Learn about Chirlane McCray at: