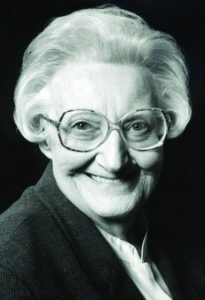 Hospice has comforted millions of people worldwide, thanks to the persistence, determination and research of Dame Cicely Saunders. This woman was born in England in 1918 of a wealthy family. At six feet tall, she was an imposing figure. Despite family objections, she entered nursing school but developed back pain and was told she couldn’t finish the training because the duties of the nurse would leave her in constant pain.

She loved the patients and became a Lady Almoner, now known as a medical social worker. In this capacity she realized that dying patients not only needed relief from severe pain but from mental anguish. They questioned their accomplishments through their lives, worried about their families and felt helpless.

Dame Saunders decided being a doctor was the way she could help dying patients. She researched ways to control pain and began to give morphine orally. Since her findings proved beneficial, she and her colleagues opened St. Christopher’s Hospice for the terminally ill. They then taught other medical professionals how to care for dying patients and the Hospice movement spread. Dean Florence Wald of Yale University Nursing School picked up the cause in America.