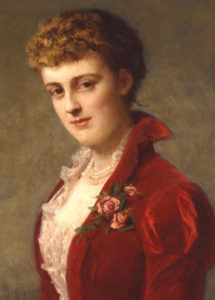 August 11 marks the 80th anniversary of Edith Wharton’s death. She won the Pulitzer Prize for Fiction in 1921 for “The Age of Innocence,” the first woman ever to earn that award. The novel was about New York high society and an ensuing scandal.

The author was born Edith Jones in 1862 of a wealthy family in New York. She spent a good part of her childhood in France, Germany and Italy, had a gift for languages and liked art, architecture and literature. She returned to New York in 1872, and her parents hired a governess to promote her education.

She would make up stories as a child, and when she was 11 she showed her mother the beginning of a novel she was writing. It started with Mrs. Tompkins saying to Mrs. Brown, “If only I had known you were going to call, I would have tidied up the drawing room.” Her creativity stalled when her mother said, “Drawing rooms are always tidy.” Yet when she was 16, “Verses,” a volume of her poems, was published.

Edith was a debutante and attended parties and balls in New York and Newport, RI. She married Edward (Teddy) Wharton in 1885. Although not compatible, the couple enjoyed traveling and architecture. In Newport Edith developed design skills and co-wrote with Ogden Codman, Jr., the successful nonfiction book “The Decoration of Houses” published in 1897.

In 1901 the couple bought 113 acres in Lenox, MA named The Mount. Edith designed the entire estate including the grounds. The house is registered as a National Historic Landmark and is open to the public with scheduled tours.

Edith’s marriage was unhappy, and when she and Teddy moved to Paris in 1907, Henry James introduced her to Morton Fullerton. The two became lovers, but even though the affair ended unhappily, in 1913 she divorced Teddy, who had a weakness for other women and for spending her money.

She loved France and lived there permanently from 1907 sharing her time between Saint-Brice-sous-Forêt, outside of Paris, and Hyères in the south of France. During World War I, she assisted the French in hospitals and in other humanitarian ways, and in 1916 she was awarded France’s highest decoration, theLégion d’honneur.

Edith wrote about 40 books on topics from architecture, gardening, interior design and travel in addition to her novels. She is best known for “The Age of Innocence,” “Ethan Frome” and “The House of Mirth.”

She died of a stroke in 1937 at age 75 and is buried in the Cimetière des Gonards in Versailles.