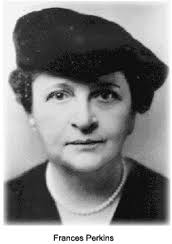 1st Woman in the U.S. Cabinet

Principal Architect of the New Deal

Franklin Roosevelt chose Frances Perkins to be his Secretary of Labor, the 1st woman to hold a Cabinet position. She had proven how passionate she was about workers’ rights and safety in the workplace.

Born Fannie Perkins in Boston in 1880, Fannie’s family was originally from Maine where they owned a farm. She grew up hearing stories of previous American wars and developed an appreciation for history.

She graduated from Mount Holyoke College with a major in physics and minors in chemistry and biology and was senior class president. Her course in American economic history made her aware of the inequities in the workplace.

She changed her name to Frances, joined the Episcopal Church and dedicated her life to developing work programs, improving working conditions and assisting women in the workforce. As Secretary of Labor, she managed to help institute the minimum wage, working hour limitations and the Social Security Act.

“The Woman Behind the New Deal” by Kirstin Downey