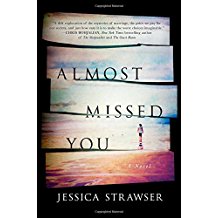 A big ‘thank you’ to Jessica Strawser, who answered my email within a few days, making me delighted she agreed to participate in my blog.

Her association with Writer’s Digest, a magazine for writers for nearly a century, goes back to her college days. She was an intern for Writer’s Digest Books while attending the E.W. Scripps School of Journalism at Ohio University in Athens, OH. As a senior, she was invited to apply for a position and was employed at the magazine upon graduation. She held various posts at Writer’s Digest, worked for other employers and came back to the magazine in 2008 and was named editor-in-chief. In 2016 her title expanded to editorial director, but as of September 2017 she scaled back her time and is now editor-at-large so she can dedicate time to her family and writing novels.

Jessica’s first novel, Almost Missed You, debuted in March 2017 and has received impressive endorsements from several writers, including Amy Sun Nathan, Garth Stein and Adriana Trigiani, among others. Jessica’s second novel, Not That I Could Tell, can be pre-ordered at https://jessicastrawser.com/not-that-i-could-tell. A giveaway of 100 copies is available from Goodreads through Oct. 17 and can be  accessed with this link: https://www.goodreads.com/book/show/34964878-not-that-i-could-tell.

JS: I would never use the word “conflict” when discussing my personal writing and my professional role at Writer’s Digest. The magazine and its community have been nothing short of a blessing, helping me grow into the writer I am today. Think of it: I’ve spent nearly a decade reading and editing writing advice all day, working with talented contributors, and interviewing writers I’ve long admired for our cover stories. My writing was of course relegated to odd moments and late-night hours as a result, but it was also ever more inspired thanks to my time at WD.