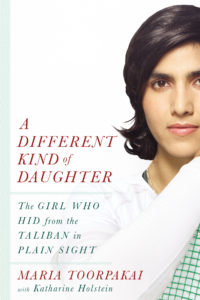 Most of us women in the U.S. have no concept of what it’s like to live under oppressive conditions or under a tyrannical regime. We go to school, buy clothes we like, date and have the freedom to choose our pursuits, including innumerable sports. Not so in many parts of the world. Maria Toorpakai, who grew up in Waziristan, Pakistan, co-wrote with Katharine Holstein about her life and journey to freedom in “A Different Kind of Daughter.” She describes Waziristan as “a remote region commonly referred to as the ‘most dangerous place on earth.’”

As a child, Maria envied the boys who could play outside, but girls were not allowed to do that. She didn’t like dresses and burned hers. With the permission of her father, who believes in gender equality, she began to dress like a boy. She was able to keep her identity hidden until she had to provide a birth certificate at the squash academy in Peshawar.

She was accepted despite her identity and was able to play squash, a sport similar to racquetball. She and her family received death threats simply because playing squash was not a ‘girl’ thing. For her safety, she had to be confined to her home.

This went on for three years before she received a response to her “help me leave Pakistan” emails, which she had sent around the world. Renowned squash player Jonathan Power came to her rescue and invited her to train with him in Toronto. Maria is now one of the best squash players in the world.

Her goal is to bring equality to remote parts of the world, starting with Pakistan.

More about Maria and her journey is at: