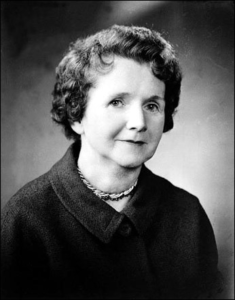 Rachel Carson brought the dangers of chemicals in the environment to the public’s attention with her book “Silent Spring” published in 1962, and the U.S. listened and changed for the better because of it. She warned people of the dangers of pesticides and the contamination of the ecosystems, prompting a presidential task force to review policies on chemical pollution.

Ms. Carson was born on the family’s 64-acre homestead in Springdale, PA on May 27, 1907. Her sister was ten years older and her brother eight years older, so Rachel spend a lot of time with her mother, who had a keen love of nature.

Ms. Carson loved reading and writing and at age 11 sent a story to “St. Nicholas League” magazine and it was published. Within a year, the magazine published three more of her stories.

She graduated Number One from Parnassus High School in 1925 and went on to Pennsylvania College for Women, now Chatham University, in Pittsburgh.

She faced adversity in a few ways. She had acute acne on her face and shoulders and was shy and didn’t make friends easily. On weekends she either went home or her mother came to stay with her at college, and her classmates made fun of her because of this. She finally made friends by helping them with their homework.

In 1941 her first book, “Under the Sea-Wind,” was overshadowed by the bombing at Pearl Harbor. “The Sea Around Us” was serialized in the “New Yorker” in 1950 and the book was released in 1951. It won the National Book award for nonfiction and the John Burroughs Medal for the most distinguished natural history book.

Ms. Carson never married. She developed breast cancer and had a mastectomy in 1960, was diagnosed with angina in 1963 and died of a heart attack in 1964.