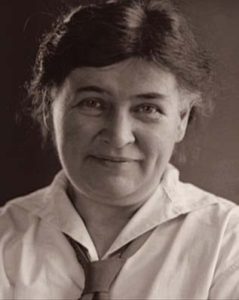 Teachers often assign one of Willa Cather’s Prairie Trilogy novels Song of the Lark, My Ántonia or O Pioneers! to their students because of her depiction of characters facing the hardships of living in rural Nebraska during the beginning of the 20th century. My Ántonia was nominated for a Pulitzer Prize but didn’t win. Her 1922 novel One of Ours won the Pulitzer Prize in 1923.

Cather has earned the label of being one of America’s greatest writers. Her first book, April Twilights, was a book of poems. She wrote reviews and articles for newspapers and magazines before her novels, 12 in all, were published. She was editor of The Home Monthly magazine and became managing editor of McClure’s Magazine in New York.

Cather’s first name was Wilella, but people called her Willa or Willie. She was born in Virginia in 1873, the oldest of seven children. She was nine years old when her family moved to Red Cloud, Nebraska after their sheep barn burned.

She was a curious child who observed the habits and cultures of the local immigrants in Nebraska and listened to their stories. She learned Greek, Latin, French and German and planned to be a surgeon. One of three students who graduated from Red Cloud High School in 1890, she was the only one the local paper reported was not destined to achieve much.

While attending University of Nebraska, she decided to be a writer when she saw her name in print in the Nebraska State Journal for writing “Essay on Carlyle.” She was active on the University’s school newspaper and upon graduation accepted a position at The Courier in Lincoln, NE.

She lived in Pittsburgh and later in New York where she was a teacher and magazine editor. She resigned from that position in 1912 to write full time. She is believed to be a lesbian, having lived with Edith Lewis, an editor, in New York for 38 years.

Her will stipulates that none of her existing letters could be published, but the restrictions were lifted sometime after 2011. The Selected Letters of Willa Cather was published in 2013. She died in 1947 and is buried at the Old Burying Ground, Jaffrey Center, NH.