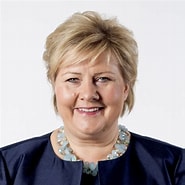 With Christmas a few days away, I wanted to feature the female political leader who lives in the country closest to the North Pole. The answer is complicated because it depends on how you measure the distance from the North Pole. Canada is the closest by coastline since it extends right up to the North Pole. Greenland is the closest by travel time because a flight takes only three hours. However, by longitude Russia is closest with 168 degrees east. Let’s do latitude. Ah, ha! Bingo! Norway is closest, measuring 71 degrees north. Norway is on the western and northernmost section of the Scandinavian Peninsula. It is considered the most developed democracy in the world and has about 5.3 million people.

It happens that Erna Solberg was Prime Minister of Norway from 2013 until 2021. She is listed as a “power woman” comparable to Angela Merkel, the former Chancellor of Germany. Solberg continues to stay in the political realm as leader of the Conservative Party, a post she’s held since 2004. She is an advocate for women’s and children’s rights and female education. She co-wrote an opinion piece in 2014 in which she states, “If you invest in a girl, she feeds herself, educates future children, lifts up her community and propels her nation forward – charting a path that offers dignity for all in the process.”

Solberg  bio:
Born February 24, 1961 in Bergen, Norway
Nickname: Iron Erna
Is said to have been treated for dyslexia
1986 – Graduated from University of Bergen with a master’s degree in sociology, political science, statistics and economics

Married to Sindre Finnes since 1996
Two children: daughter, Ingrid; son, Erik
2021 – admitted she broke the COVID rules for having 13 people at her 60th birthday party. Ten was the limit.