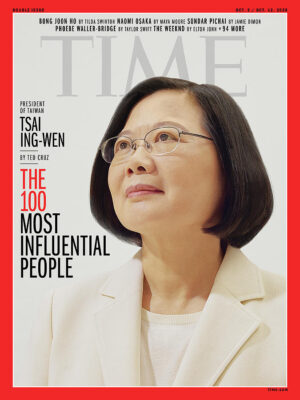 Tsai Ing-wen (pronounced Sigh⸍ Ing-when⸍) was elected president of Taiwan in January 2016 and reelected in January 2020, the first woman to hold that office. She is a remarkable woman. She has a firm grasp of the English language, holds a Ph.D. in law and was instrumental in negotiations to have Taiwan join the World Trade Organization, which occurred in 2002.

Taiwan is an island in the western Pacific, about 100 miles off the coast of mainland China. Taipei is its capital, and it has about 23 million residents. Its history gets complicated. Both Taiwan, also known as the Republic of China, and mainland China, known as the People’s Republic of China, agree that Taiwan is a province of China. However, Taiwan says it is the legitimate government, but PRC says IT is. The United Nations recognizes PRC, not Taiwan.

In 1949 the Nationalists lost the civil war to the communists in China and went to Taiwan, which holds democratic elections unlike PRC. Tsai says President Xi of PRC cannot coerce Taiwan to be part of mainland China because it “offers neither a free and democratic way of life for Taiwan, nor sovereignty for our 23 million people.” This struggle deserves watching, especially since it’s apparent Tsai won’t allow mainland China’s aggression to overtake Taiwan.

In her May 2020 inaugural address, Tsai recounted the two major achievements since her inauguration in 2016: controlling COVID and Taiwan’s economic growth. Looking forward she outlined “six core strategic industries….to transform Taiwan into a critical force in the global economy.” Taiwan now manufactures 50 percent of the world’s semiconductors. This country and Tsai are worth following.