Women and Adversity: Ann B. Ross and the Miss Julia Series 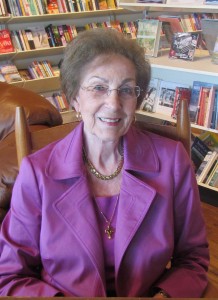 I interviewed Ann B. Ross, the author of the Miss Julia book series, who was coming to Myrtle Beach to promote her recent release, “Miss Julia Lays Down the Law.” This is the 17th book in the series about an elderly woman who stands by her convictions, expresses her opinion and has clout in her fictional small town of Abbotsville.

Ms. Ross was a delightful person and revealed some of the challenges she faced as she worked toward becoming a published writer.

“I can tell you the silliest thing in the world,” she said, adding that she wanted to be a writer from the time she was a child. “I was going to name my heroes things like Richard Richards and call him Dick, and William Williams and call him Bill. I was into all these double names. I was probably 10 or 11 or 12.”

Ross said she wrote pieces for her high school newspaper but after graduation chose nursing as her career. “My main purpose at that time in my life was to make a living, and that seemed to be the way to go,” she said.

Nursing was part of her life until she began to raise a family. She stayed home with her three children, but as they grew and went off to college, she said she needed more. She started writing and in the early 1980s, Avon original paperbacks published her mysteries, “The Murder Cure” and “The Murder Stroke.”

“Neither one of them did very well,” she said, “and I thought, ‘I tried that, and it didn’t work out very well,’ so I thought I’d do something else.”

She went on to earn a bachelor’s degree in literature from the University of North Carolina at Asheville and continued at the University of North Carolina at Chapel Hill, where she earned a master’s degree and a Ph.D. In 1987, her hardback, “The Pilgrimage,” a story of two sisters going west “to convert savages” during the heyday of that migration, was published, but none of these three early works is still in print.

Miss Julia developed in Ann’s imagination and has mushroomed to being the success it has become, including translations into Italian, German, Polish, Croatian and Japanese. She said she’ll write Miss Julia books until her editors stop wanting them, but she won’t stop writing. She’d write@ about the fourth-century when Constantine, Jerome and Ambrose lived because “that’s my field of study.”

She said she would like to visit Europe, but she won’t fulfill that dream. “I don’t fly, so I’ll never get there,” she said.

One idiosyncrasy she said she has is reading about the Roman Empire and the early days of Christianity, and learning the Lord’s Prayer and the 23rd Psalm in Latin.

You can read more about Ross and Miss Julia at www.missjulia.com, or send her an email at aross@missjulia.com.