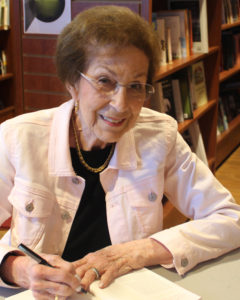 Women and Adversity: Ann B. Ross, Part I

Miss Julia made her debut in 1999 with Ann B. Ross’ Miss Julia Speaks Her Mind, and on April 2, 2019 she made her 21st appearance in Miss Julia Takes the Wheel. All Miss Julia books are still in print.

I featured Ms. Ross on this blog four years ago but connected with her again. Since she answered my questions in depth, I am posting them in two parts.

JAM: What was the biggest obstacle you faced when you started writing the Miss Julia novels?

ABR: Lack of confidence! When I started the first Miss Julia book, I had nothing but the character, herself——no plan, no outline, no idea of where the story would go. And, of course, no assurance that it would be worthy of publication or that anyone would read it if it did get published. But then, all first-time writers face the same problems——how much time should be spent on something that may never be read? What if I hit a wall and can’t go any further? Am I creating an interesting story arc? What if the main character is unsympathetic? How in the world will I wrap everything up and end this story in a satisfying way?

The only thing that kept me going on that first story——and actually every story since then——was Miss Julia, herself. I got so involved in discovering her voice and being surprised at her outspoken opinions that she kept me wondering what she would do or say next. But still, I didn’t know where that first story was going even though things kept happening without my planning more than one scene ahead; new characters kept appearing, and my interest kept increasing. It wasn’t until I was about three-fourths of the way through that I thought I’d hit a wall and wouldn’t be able to get over it. Then, in a casual conversation with an attorney on the way to a ballgame, I learned that in the state of North Carolina a will cannot exclude a surviving spouse——she (or he) will inherit half of an estate even if a will does not so designate.

That gave me the impetus to finish the story and to end it on a high note. And, as I later discovered, it led to further conflicts among the characters that formed the ideas for later books.