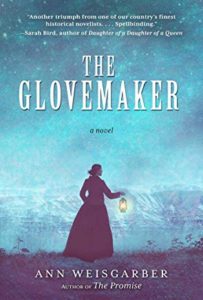 Since Ann Weisgarber’s answers to my questions include inspirational and motivational details, I chose to divide the post into two parts. Here’s the link to Part I: https://wp.me/p4szxH-Ls.  Her protagonists experience hardships of the times. The Personal History of Rachel DuPree takes place in the Badlands of South Dakota during the early 20th century. The Promise takes the reader to Galveston, Texas in 1900, and Anns’ newly released The Glovemaker takes place during the winter of 1888 in the Utah Territory.

Ann, a native of Ohio, doesn’t write from eperience of hardships she endured but was inspired to write about conditions of the past.

JAM: What was the biggest obstacle you faced when you wrote The Promise?

AW: Deadline. With the success of The Personal History of Rachel DuPree in the UK and eventually the U.S., I had a contract for Books 2 and 3 with Pan Macmillan. I’m a slow writer and rather than the deadline spurring me on, it weighed me down. I eventually decided to write The Promise at my own pace and not worry about the deadline. That liberated me to focus on writing the best story I could. I missed the deadline by a few years but the earth continued to spin.

JAM: What was the biggest obstacle you faced when you wrote The Glovemaker?

AW: I grew up in a household where we didn’t discuss politics or religion when company came for dinner. These topics were too controversial. So what did I do in The Glovemaker?I broke the rules and wrote about a small Mormon community in Utah Territory during 1888 when the federal government was arresting men with plural wives.

Like with Rachel DuPree, my inner critic told me I couldn’t and shouldn’t. But like with Rachel, another woman urged me on. I didn’t find her in a photograph, though, but in historical documents. Nothing remains of her but her gravesite, and I felt I owed her a voice. During the years of working on the manuscript, I kept a photo of her grave with me to keep my inner critic at bay.

AW: Compared to the obstacles my characters face, my challenges are tiny bumps. I have the luxury of working in an air-conditioned room, grocery stores are an easy drive away, and my home is safe and calm. I’m fortunate I get to do what I love doing.

You’re never too old to try something new. I was in mid-forties when my first book was published. Don’t let anyone tell you that you can’t and you shouldn’t. Here’s what you say to inner and outer critics: “Oh yeah. Watch me.”