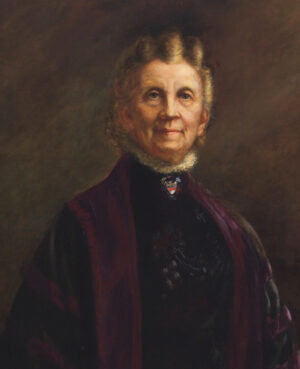 First Woman to Argue Before the Supreme Court

Belva Ann Lockwood’s flamboyant manner and special ability of self-promotion helped people of her era become more aware that women had talents equal to those of men. When she was denied the right to argue before the Supreme Court because she was a woman, she lobbied Congress for five years before they passed “A Bill to Relieve Certain Legal Disabilities of Women.” President Rutherford B. Hayes signed it on February 15, 1879. Lockwood was the first woman to practice law before the Supreme Court.

She is also known as the first woman to run a dedicated, legitimate national campaign for president of the United States. Although Victoria Woodhull announced her candidacy for the presidency in 1872, she did not meet the Constitutional age requirement of being at least 35 years old, didn’t have a well-organized campaign and did not have her name on any ballot.

Lockwood chose to run for president in 1884 on the National Equal Rights Party ticket after the two major political parties did not endorse suffrage for women. In her first speech of the campaign, she said the Constitution did not prevent her from running, and further, “I cannot vote, but I can be voted for.” Marietta Stow, an activist from California, was her running mate.

Lockwood understood she wouldn’t be elected, but she emphasized issues of concern to her:

Ironically, suffragists supported the Republican Party, believing a Republican majority would pass suffrage for women. In the end Lockwood received about 5,000 votes. She maintained that the total was inaccurate, saying that votes for her were destroyed or not counted. In the end, Grover Cleveland became the first Democrat in the White House after the Civil War. Lockwood ran for president again in 1888 on the National Equal Rights Party ticket, but with less fanfare. Benjamin Harrison, a Republican, defeated Cleveland, not by the popular vote but in the Electoral College.

Belva Ann Bennett was born October 24, 1830 in Royalton, N.Y., near Niagara Falls. When she was 14, she graduated from public school and began teaching. She used the money she earned to attend one year at Royalton Academy, a private school for those preparing for college. Her father objected to her going to college, so when she was 18, she married Uriah McNall, who worked at a saw mill. The couple had a daughter, Lura, in 1849. McNall became ill and died in 1853.

A widow at 22 years of age, Belva accepted a teaching job but learned that men earned twice as much as she did for the same job. Instead of teaching, she sold some of her late husband’s property and used the money to attend Genesee Wesleyan Seminary in Lima, N.Y. and left Lura with her parents.

She graduated in 1857 and held administrative positions but was disappointed in the limited views people had of women’s abilities. She moved to Washington, D.C. with her daughter and sister in 1865

and established a school for young women. She was 37 years old when she married Ezekiel Lockwood, a dentist. Their only child died at 18 months old.

Belva continued to speak out for equal rights, lobbied Congressional leaders, and helped draft a bill requiring equal salaries for all civil service employees. She decided law school was the answer to making changes, but law schools refused to admit her because she was a woman. When National University Law School in D.C. started admitting women in 1870, she applied. Of the fifteen women admitted to the school, she was one of the two who completed the course of study in 1873. However, the school declined to issue the female graduates their diplomas.

Lockwood wrote to President Ulysses S. Grant, chancellor ex officio of the school, stating, “I desire to say to you that I have passed through the curriculum of study in this school, and am entitled to, and demand, my diploma.” It arrived about two weeks later.

Belva had a successful law practice and worked tirelessly for women’s rights and social causes. She was a member of the Universal Peace Union and traveled to Europe to speak for peace and arbitration. In 1914 she said, “If [a woman] demonstrates that she is fitted to be president she will someday occupy the White House. It will be entirely on her own merits, however. No movement can place her there simply because she is a woman. It will come if she proves herself mentally fit for the position.”

Belva Ann Lockwood died May 19, 1917, three years before the Nineteenth Amendment was ratified, granting women the vote. She was 86 years old. She had outlived Ezekiel, who died in 1877, and her daughter, Lura, who died in 1894. I feature Belva Ann Lockwood in my ebook, Women and Adversity, Saluting 23 Faithful Suffragists, available at amazon.com and barnesandnoble.com.