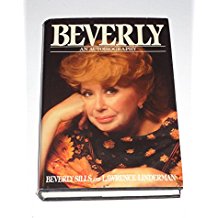 Although Beverly Sills attained world-wide fame for her phenomenal singing ability as a coloratura soprano and opera singer, the tragic part of her life is that her two children had disabilities. Her daughter, Meredith “Muffy,” was born hearing impaired and later developed muscular sclerosis. Her son, Peter “Bucky,” had multiple challenges, including hearing impairment, autism, epilepsy and intellectual disability. These infirmities made Beverly and her husband, Peter Greenough, aware of the population with special needs, and they gave generously in various capacities to philanthropic causes.

Beverly Sills was born Belle Miriam Silverman in Brooklyn, NY in 1929 and was singing on the radio by the time she was three. She was named Brooklyn’s “Miss Beautiful Baby 1932” and became known as “Bubbles,” the child singing celebrity on the radio show Rainbow House. She also sang in various commercials and in a movie.

Her true love was opera and by age seven, she had memorized 22 arias and by 19 had memorized almost 60 operas. She joined a Gilbert and Sullivan touring company in 1945 and made her operatic debut in Philadelphia in 1947. She debuted with the New York City Opera in 1955 and the Metropolitan Opera in 1975.

In 1956 she married Greenough, a journalist whose family owned the Cleveland Plain Dealer.He later was a columnist for the Boston Globe.

She was an active volunteer:

She retired from singing in 1981 but appeared on several television shows including frequently on the Tonight Show.

Send me an email to let me know what women you would like to know more about: jamathews124@gmail.com