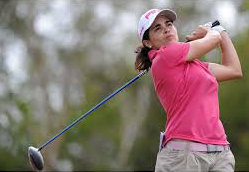 I don’t play golf, but the story of professional golfer Candy Hannemann, 35, attracted my attention.

She came to Florida from Rio de Janeiro, Brazil, in 1997 to play in the IMG Academy. She went on to Duke University and played on its women’s golf team. As a pro from 2003-09, she earned about $500,000, but she needed surgery to repair cartilage on her right wrist and gave up the sport ──until she learned that golf will be a sport in the Olympics, which will be played in Rio in 2016. She began playing golf again in May 2014 and wants to represent Brazil on the team, hoping for a dream come true.