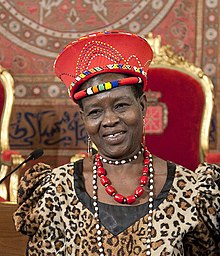 Advocate for Young Women in Malawi

“When girls are educated, everything is possible,” says Chief Theresa Kachindamoto, tribal ruler over the 900,000 people in Dedza District in the African country of Malawi.

Chief Kachindamoto is depicted as friendly yet fearsome. A mother of five sons, she advocates for girls. When she was named Chief in 2003, she came back to Mtakataka where she was born and was horrified to see twelve-year-old girls with babies. The rural custom, poverty and lack of education are among the reasons girls marry as teens. “If they are educated, they can be and have whatever they want,” she says.

Known as “The Terminator,” Kachindamoto as chief has the authority to annul marriages and is recognized throughout the world as ending child marriages. Reports indicate she has ended at least 1,000 child marriages, but possibly as many as 4,000. After she annuls the marriage, she sends the girls and boys back to school. She also banned cleansing rituals, a form of sexual abuse in which a girl is forced to have sex with a man when she reaches puberty.

Kachindamoto dismissed male subchiefs who continued allowing cleansing and child marriage. With her strict enforcement of annulments, it took until 2015 for the Malawi Parliament to pass the Marriage, Divorce and Family Relations Law, which increased minimum age of marriage from 15 to 18. However, a loophole allowed child marriages when the youths had parental consent. An amendment to the law in 2017 closed the loophole. Kachindamoto is now working on having the minimum age raised to 21.

Kachindamoto was born in 1959 and is the youngest of 12. She credits her father, who was the area’s senior chief, with insisting she complete her education. She got a job as secretary at a city college in Zomba and worked there for 27 years. She saw how education helped women choose a career and support themselves.

She was not interested in being chief of the Dedza District, but a group of her tribal royal family visited her to say she was chosen to replace her brother, who had died. She is quoted as saying, “They said they picked me because I was the most educated and successful, and I’m good with people.” She believed it was her duty to accept the role as chief.

No official birthday or information about her husband and children was readily available.

You can read about Chief Kachindamoto in my ebook, Women and Adversity, Recognizing 23 Notable Mothers, available at amazon.com and barnesandnoble.com.