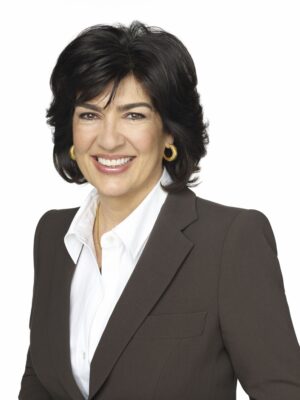 One of the most respected and recognized journalists in the world is Christiane Amanpour. She has embraced adversity by covering stories in war-torn countries around the world and by interviewing world leaders. She says, “If you want [journalists] to be the eyes and ears in our field…you need people who are willing to go to the battlefield.” She is currently the host of Amanpour & Company on PBS. At CNN, where she has worked since 1983 with a very short break, she is host of the international nightly interview program and chief international anchor. Her interest in journalism arose when her family had to leave Iran during the 1979 Islamic revolution. However, when she was in school she hoped to be a doctor.

Amanpour was born in London in 1958 of a British mother and Iranian father. Shortly after she was born, the oldest of four daughters, her father, a Muslim and Iranian airline executive, moved the family to Iran. Amanpour, whose mother was Catholic, attended Catholic schools in England.

She received her degree in journalism from University of Rhode Island and worked a short time for the NBC affiliate in Providence before going to CNN. She wasn’t immediately embraced as a television presence because of her accent and dark hair, but her reporting of the Iran-Iraq War through the 80s, and the Bosnian War into the 90s won her international recognition. She says, “I realized in Bosnia that, even if it means you’re going to be accused of not being fair, you have to tell the truth.”

Amanpour can be labeled “fearless, intrepid, daring and heroic” because she has never shied away from challenging stories:

She has won innumerable awards, among them Emmys, Peabodys and DuPonts, and is a great defender of freedom of the press. She appeared in the movies Iron Man 2 and Pink Panther 2 as herself.