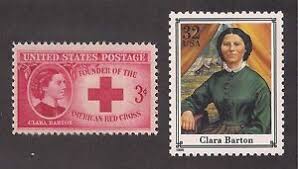 Clarissa “Clara” Barton was born on December 25, 1821, 199 years ago in Oxford, Massachusetts, the youngest of six children. She was a shy girl, and on the recommendation of phrenologist L.N. Fowler, her parents directed her to the teaching profession.

Barton began teaching as a teen and taught in her hometown for six years before she opened her own school for children who worked at her brother’s mill. In 1850 she chose to further her teaching education and attended the Liberal Institute of Clinton, New York. Two years later she moved to Bordentown, New Jersey and opened a free school there. It became so large that local leaders decided a man should be principal and hired him at twice the salary Barton had received. She resigned and went to Washington, D.C. where she was hired as a recording clerk in the U.S. Patent Office and earned the same as her male co-workers.

After the Civil War broke out, Barton realized soldiers from Massachusetts were housed in the Senate chamber. That’s when she started to bring supplies from home to minister to them. This began her mission to provide assistance during disasters. She earned the title “Angel of the Battlefield” and went on to:

Barton was also a proponent of equal rights and spoke out for women’s suffrage around 1866, and in a speech she gave that year, she alluded to the Emancipation Proclamation of 1863, saying, “I did not purchase my freedom with a price; I was born free; and when, as a younger woman I heard the subject discussed, it seemed simply ridiculous that any sensible, sane person should question it.”  She went on. “And when, later, the phase of woman’s right to suffrage came up, it was to me only a part of the whole, just as natural, just as right, and just as certain to take place.”

Barton spoke at the first National Woman Suffrage Association convention in Washington, D.C. in 1869. She continued her support for suffrage and when the National American Woman Suffrage Association was formed, she spoke at several of its conventions. At the 1904 convention she held a reception at her home in Glen Echo, Maryland to honor the birthday of her friend, the suffragist Susan B. Anthony. When she couldn’t attend conventions, she sent letters of support. In 1909 Barton served on an honorary advisory committee of the National Committee on the Petition to Congress for woman suffrage.

Clara Barton was president of the American Red Cross from 1881to 1904. She never married and had no children. She died in Glen Echo, Maryland on April 12, 1912 at the age of ninety.