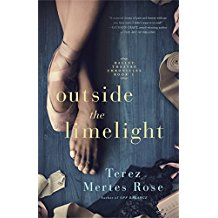 Fictional sisters in Outside the Limelight, Book 2 in the Ballet Theatre Chronicles series

Somehow this book got into my Kindle, and I couldn’t ignore it.

Tutu, plié and barre are about the only ballet terms I knew until I read Outside the Limelight, but this novel’s message includes more than a ballet instructional. It’s the story of two sisters, both ballerinas, and their jealousies, hopes, dreams, romantic entanglements, heartbreaking misfortunes and relationship to each other and others in their lives.

The characters are complicated and live complicated lives. Rebecca and Dena Lindgren are competitors in the West Coast Ballet Theatre in San Francisco. Anders Gunst, the company’s artistic director, promotes Dena to soloist, much to the surprise of everyone associated with the ballet company.

Dena is overjoyed but confused because Rebecca is older, beautiful and more experienced. Besides, everyone believed Rebecca would be chosen for the promotion, including Rebecca.

Four years later misfortune strikes and Dena falters and falls during a performance. The intense competition in the ballet world starts the gossip and finally Dena is diagnosed with a brain tumor. She has no balance. Her career is more than compromised. It is probably ended, but she doesn’t want to give up. Anders’ interest in Rebecca is revealed, and more conflicts, guilt and compassion ensue.

Author Terez Mertes Rose includes medical information in layman’s terms so the reader can understand what is happening to Dena. As a former ballet dancer, she has the insight to provide a glimpse into the world of the ballerina, the highs and lows, the wear and tear on the body, the determination to give the best performance despite the excruciating pain shooting through the toes, the feet and up the legs to the hips.

Rose writes an intriguing novel that captivates the imagination and engrosses the reader’s interest. I give it five stars and plan to read Off Balance, Book 1 in Rose’s Ballet Theatre Chronicles series.