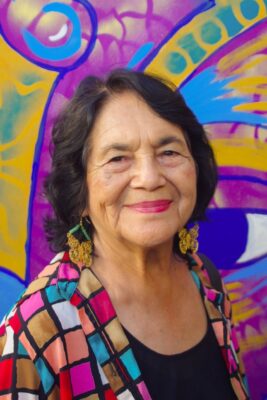 “Identify me as an organizer,” Dolores Huerta says, her strong, vibrant tone defying her ninety years. “Learn that I’ve dedicated my life to teach people to be responsible. Use your power. Don’t be afraid. Take action.”

Activists, she says, must convince people their votes count by giving examples of how officials can meet their needs. They must explain in concrete terms how elected officials can disburse resources fairly. If people want their needs met, they must vote and elect those who sympathize with their concerns.

Huerta founded the Agricultural Workers Association in 1960, helped farmworkers register to vote, and lobbied the California legislature to provide public assistance and pensions to non-U.S. citizens. It wasn’t until 1962 that she and César Chávez co-founded what later became the United Farm Workers of America (UFW). Sí se puede (Yes, we can) became the mantra of the organization. Huerta resigned from the UFW in 1999 and is no longer associated with it.

Dolores Fernández was born April 10, 1930, in Dawson, New Mexico. Her father, Juan, was a farmworker and miner and a union activist. He was elected to the New Mexico legislature in 1938. Her parents divorced when Dolores was three, and her mother, Alicia, took her three children to Stockton, California, where she worked as a waitress and in a cannery. Alicia encouraged her children to participate in extracurricular activities, and Dolores, who loves music, learned to dance and play the violin and piano. She was also an active Girl Scout until she was eighteen years old.

After high school Dolores married and had two daughters, but divorced and eventually earned an associate degree from Stockton College, part of the University of the Pacific in Stockton, California. She taught elementary school for a few years but was horrified at the racial prejudice and living conditions her students faced. They were primarily children of migrant farmworkers. She knew she had to improve their lives and believed it would happen when the farmworkers:

Through her activism, Dolores was instrumental in getting passed the Immigration Reform and Control Act of 1986, also referred to as the Amnesty Act. One aspect of the law was to allow legal status to those who entered the U.S. before January 1, 1982.

Huerta married a second time and had five children, but that marriage also ended in divorce. She later had a relationship with Richard Chávez, César’s brother. The couple had four children. All eleven of Huerta’s children reside in California and are activists.

Among the distinguished awards Huerta has received are:

Huerta founded the Dolores Huerta Foundation with the $100,000 prize money she received with the Puffin/Nation Prize. The Foundation works to improve the communities it serves and trains leaders to see those improvements become reality.

Dolores Huerta lives in Bakersfield, California, and continues as president of her Foundation.