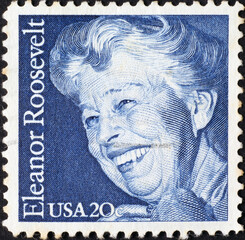 I have featured Eleanor Roosevelt in the past, but for Women’s History Month I thought it appropriate to highlight her again as our most influential First Lady. An item in the winter 2022 National Federation of Press Women newsletter by its president Karen Rowley revealed that Eleanor Roosevelt was a member of the organization. A press card, which is in the FDR Presidential Library, shows Mrs. Roosevelt as an at-large member in 1960. I’ve been a member of the group for 35 years and am proud that it was established, as Rowley writes, in 1937 by 39 women in Illinois, my home state.

I never thought of Roosevelt as a journalist and didn’t know she wrote the syndicated column “My Day” six days a week from 1935 until she died in 1962, almost totally uninterrupted. She has 27 books to her credit and more than 500 published articles in magazines such as Ladies Home Journal and other nationally circulated magazines. This shows the extent of the woman’s talents since she is primarily known as the First Lady from 1933-45 who advocated for civil rights and equal rights for women and minorities. She continued to inspire people around the world after she left the White House when her husband died and traveled the world declaring essential human rights.

Roosevelt was christened Anna Eleanor Roosevelt and is the longest serving First Lady and one of the most respected. Her life was filled with adversity:

Roosevelt overcame adversity throughout her life and:

Some of her celebrated books are You Learn by Living: Eleven Keys for a More Fulfilling Life, It’s Up to the Women and her autobiography. Dozens of books about Eleanor Roosevelt are on the market, but articles provide basic information: