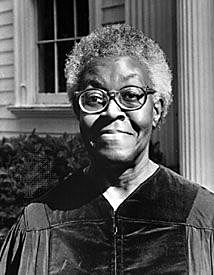 I met Gwendolyn Brooks in 1990 when I asked her to be a featured speaker in a writers’ conference I organized at Prairie State College in Chicago Heights, Illinois. She was one of the most gracious women I have ever met in my life. She was soft-spoken, deliberate and considerate. I was astonished when she produced copies of a few of her books and asked me to choose one she would autograph. I picked Blacks because I thought it defined her ability to express the needs and dreams of all people.

Brooks was the first Black to win a Pulitzer Prize. She won the award—Pulitzer Prize in Poetry—with Annie Allen in 1950. She was Poet Laureate of Illinois from 1968 until her death in 2000 and is one of the most highly acclaimed poets in American literature.

Brooks was born June 7, 1917, in Topeka, Kansas, and was a baby when her family moved to Chicago, Illinois. She endured discrimination and social rejection growing up because of her color.

Encyclopedia of World Biography cites passages from George Kent’s A Life of Gwendolyn Brooks in which he writes Brooks was not accepted by fellow Blacks when she was growing up because she didn’t have social or athletic abilities. She, of course, was hurt at being rejected, so she spent most of her time writing.

Her talent for writing poetry prevailed. When she was thirteen, her first published poem, “Eventide,” appeared in American Childhood magazine. The nationally recognized and respected Black newspaper The Chicago Defender published her poems while she was in high school.

Brooks received an associate degree in literature and arts from Woodrow Wilson Junior College in Chicago (now Kennedy-King College), but had a difficult time finding a job because of her skin color. She became involved with the Youth Council of the National Association of Colored People and was its director of publicity for the Chicago chapter. Her first collection of poetry, A Street in Bronzeville, was published in 1945.

She married Henry Blakely, Jr. in 1939, and the couple had two children, Henry and Nora.

Brooks wrote about prejudice, poverty, discrimination and the plight of Blacks, specifically Black life in Chicago. She was able to capture the desperation, isolation and anguish of the people. She presents situations in a way that people understand.

I feature Brooks in my ebook, Women and Adversity, Honoring 23 Black Women, which is available at www.amazon.com  and www.barnesandnoble.com.

For more about Brooks: