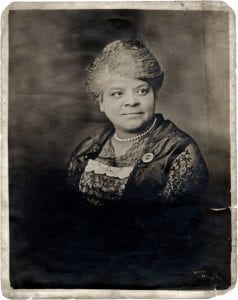 Women and Adversity: Ida B. Wells

Ida B. Wells died of kidney disease 90 years ago today on March 25, 1931 in Chicago. As I wrote in my ebook Women and Adversity: Honoring 23 Black Women, I grew up hearing the name Ida B. Wells. A housing project in Chicago was named after this Black writer and activist, but I didn’t know who the woman really was or what she did.

Ida B. Wells was not only the daughter of slaves, she was born a slave on July 16, 1862 in Holly Springs, Mississippi, the oldest of eight children. Despite being freed by the Emancipation Proclamation, she and her family experienced severe discrimination; however, they exercised the privilege of getting an education at the town’s Rust College, a historically Black college founded in 1866.

Her parents and a younger brother died in the yellow fever epidemic in 1878, and Wells took a job as a teacher to provide for her siblings. When an aunt invited her to Memphis in 1882, she accepted the invitation and acquired a teaching job there. She continued her education at the traditionally Black LeMoyne Normal and Commercial School in Memphis, and during the summers, she took courses at traditionally Black Fisk University in Nashville.

In May 1884 she was riding the train from Memphis to Nashville when she was told to move from the “women’s car” to the car for Blacks. Like Rosa Parks in 1955, she refused. In her autobiography she writes that the conductor “tried to drag me out of the seat, but the moment he caught hold of my arm I fastened my teeth in the back of his hand.” The result was the conductor got two other men to drag her out of the car.

The incident initiated Well’s civil rights activism. She sued the railroad and won the case in the circuit courts, but the railroad appealed, and the Tennessee Supreme Court overturned the ruling. Wells began writing articles about race and politics in the South and bought a share in the Memphis Free Speech and Headlight newspaper.

A lynching in Memphis of three Black businessmen in 1892 made Wells incensed at the injustice, and she continued to write about discrimination against Blacks. This infuriated some Whites, who destroyed her newspaper offices and equipment. She was in New York at the time but was warned she’d be killed if she returned to Memphis. She moved to Chicago, which became her permanent home.

In 1895 she married Ferdinand Barnett, a prominent Chicago attorney and founder of Chicago Conservator, the city’s first Black newspaper. The couple had four children. I never remember hearing her called or referred to as Wells Barnett. It was only Ida B. Wells.

She continued her activism in Chicago, and in 1896 she formed National Association of Colored Women. She called for an end to discriminatory hiring practices and fought for women suffrage. A conference of activists she attended later became the NAACP.

Wells was 68 when she died. Her husband died five years later in 1936.