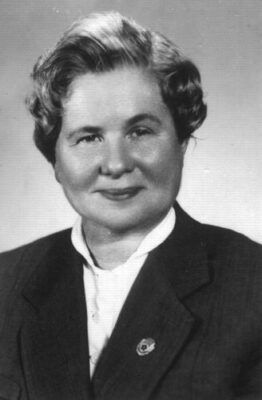 Irena Sendler, Mother of the Children of the Holocaust (Pinterest)

Mother of the Children of the Holocaust

Irena Sendler’s father told her when he was dying, “If you see someone drowning, you must try to rescue them, even if you cannot swim.” His daughter heeded his words and is credited with saving 2,500 Jewish children.

Irena Krzyżanowski was born February 15, 1910, the only child of Dr. Stanislaw and Janina Krzyżanowski. Her father was a Catholic physician who ministered to the sick no matter what religion or background. The family lived in Otwock, Poland, near Warsaw, and he was the only doctor in Otwock who would treat the poor, mostly Jewish, with typhus. In 1917 he died of the disease.

After his death, Jewish leaders helped pay for Irena’s education. She studied Polish literature at Warsaw University but was suspended for three years because she opposed the ghetto-bench system, which segregated Jewish students. Those opposing this system stood instead of being seated.

In 1931 Irena married Miecsyslaw Sendler, and the couple moved to Warsaw. When the Germans invaded Warsaw in 1939, Irena began giving food and shelter to Jews. She doubled her efforts in 1940 when the Warsaw Ghetto was erected. The Ghetto was an area the size of Central Park in New York City where 450,000 Jewish people were enclosed. These people were sent to concentrations camps or died because of the unlivable conditions in the Ghetto, so she worked harder to save them.

As a social worker, Sendler had papers to enter the Warsaw Ghetto, and she began creating false documents to help people escape. She joined the Żegota, a Polish underground group that helped save Jewish people. She was put in charge of the Children’s Division, and the group used several means to help children escape. They hid a child under a stretcher in an ambulance, used sewer pipes and underground passages or carried a child hiding in a sack or suitcase.

Sendler and her network helped place children in homes. The people hiding the children knew they had to return them to Jewish relatives after the war. Sendler kept a list of the names of all the children she saved, hoping they could be reunited with their families. However, most of the adults died at the Treblinka concentration camp.

Sendler was arrested October 20, 1943, and placed in Pawiak Prison. She was tortured when she wouldn’t reveal the names and addresses of the Żegota leaders. She received a death sentence and was believed to be shot. However, Żegota had bribed the German executioner, who helped her escape. Posters of her execution were displayed all over Warsaw, and she was able to read them herself. She remained in hiding until after the liberation of Poland in 1945.

Her marriage to Sendler dissolved in 1947. That same year she married Stefan Zgrzembski, a Jewish man she met at Warsaw University. The couple had three children: Andrzej, who died in infancy; Adam, who died of heart failure in 1999; and Janina, who lives in Warsaw. Sendler’s marriage to Zgrzembski ended in 1959.

A group of Kansas teens wrote a play in 2000, Life in a Jar, about Sendler’s mission to save children. Several biographies have been written about her, including Irena Sendler: Mother of the Children of the Holocaust by Anna Mieszkowska. The Courageous Heart of Irena Sendler was a 2009 made-for-TV movie.

You can read about Irena Sendler and other outstanding mothers in my ebook Women and Adversity, Recognizing 23 Notable Mothers.