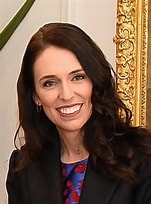 It’s fascinating to learn about the women who are the leader of their nation. Currently, there are more than two dozen worldwide, and Jacinda Ardern, Prime Minister of New Zealand, is one of the youngest. She will turn 42 on July 26. New Zealand, with a population of nearly five million is comprised of two main islands in the southwestern section of the Pacific Ocean: the North Island and the South Island and more than 700 smaller islands.

Arden has another claim to fame by being the second woman in history to give birth while in office. (Benazir Bhutto gave birth to a daughter in 1990 when she was prime minister of Pakistan.) She was elected prime minister in 2017 and her daughter Neve Te Aroha Ardern Gayford was born in June 2018.

Ardern hasn’t married her partner, Clarke Gayford, a television host and stay-at-home dad. The couple had planned a January 2022 wedding until New Zealand experienced several cases of the Omicron variant. So far the couple haven’t rescheduled their wedding.

What should we know about Ardern?