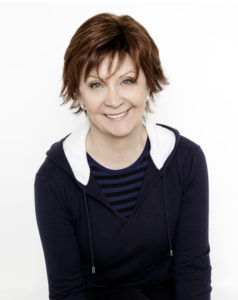 At google.com, choose any number from one to 26, add Stephanie Plum, and you’ll find a novel featuring this Trenton, N.J. bounty hunter, the unique character Janet Evanovich created. Twisted Twenty-Six will be released November 12, and Evanovich can continue adding as many numbers as she wishes to this popular bestselling franchise, and they will sell.

Evanovich wrote for about 10 years and collected dozens of rejection letters before she had Hero at Large published in the now defunct Second Chance at Love romance line. She wrote a dozen romances in five years under the pseudonym Steffie Hall before losing enthusiasm for writing them. She chose to change directions and spent two years learning the mystery genre, thus she developed Stephanie Plum and a cast of likeable characters.

Evanovich, née Schneider, grew up in Trenton and earned a bachelor’s degree in art at Rutgers University’s Douglass College. She and her husband of more than five decades, Peter Evanovich, have two children, Peter and Alexandra. They lived in New Hampshire until 16 years ago, then moved to Naples, Florida. Evanovich has written and co-authored 67 books.

JAM: You wrote for 10 years before you had a romance accepted for publication. Why did you continue writing for 10 years?

JE: While I knew that my first book wasn’t perfect, I knew if I kept at it, my writing would probably improve. And, though, I could have re-written that first book to death, I chose instead to move into a second book… and then a third. I could really see the improvement and that’s what kept me going. I did have a dark moment at the 10-year mark when I took all my rejection letters and burned them. However, in just a couple of months, I made

JAM: Why did you use a pseudonym for your first books?

JE: I wasn’t given a choice. My publisher demanded that their authors take a pseudonym.

JAM: What was the biggest obstacle you face when you decided to have Stephanie Plum be your protagonist?

JE:  I knew I could write a funny protagonist and populate the book with plenty of interesting characters. However, other than making mental notes while watching that hilarious bounty hunter movie, Midnight Run, starring Robert De Niro, I really didn’t know a thing about how the bail bonds industry actually worked. So, I decided to reach out to a number of professionals and pick their brains. Many meetings and a few too many beers later, I had a reasonably good education.
JAM: What obstacle/s do you face now as a writer?
JE: Though I tend to write seven days a week and have a good work ethic, my biggest obstacle is a looming deadline. But, instead of being a crippling thing, I make it a positive. I use it as a way of making me focus. So far, so good. I’ve always been able to deliver a manuscript on time.