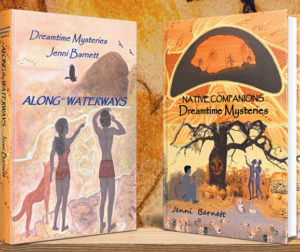 In Native Companions, the first book in her Dreamtime Mysteries series, Jenni Barnett writes about aboriginal culture through the eyes of her protagonist, Rex Graham. Rex continues his search for his indigenous history in book two, Along the Waterways. Jenni explains that Book three, Return to Eternity, concerns the penal settlements in New South Wales and Queensland through the emancipation of convicts. She is fascinated that Australian Bushmen can access an instinct to survive in remote regions of Australia.

Jenni developed an interest in anthropology and indigenous societies while a student at Woodlands Girls Grammar School in Glenelg, Australia. She was a student nurse at Queen Elizabeth Hospital but took a break and began working at Wilpena Pound National park. She returned to nursing and became a registered traditional western and Chinese medicine practitioner.

Jenni and her husband live in a Queensland country town.

JAM: What was the biggest obstacle you faced when you wrote Native Companions?

JB: The greatest obstacle I faced when I wrote Native Companions was getting a white audience willing to sit down and read the facts, and to absorb and appreciate the truth about the intelligent and gifted landowners in this country.

JAM: What was the biggest obstacle you faced when you wrote Along the Waterways?

JB: I never really faced any obstacles when I wrote Along the Waterways, as it flowed on from the first book and was much easier to write as I wasn’t required to include all the footnotes, so to speak.

JAM: What is the biggest obstacle you face now?

JB: Now that I have completed my third book in the series, Return to Eternity, I see it as a challenge but do not envisage any obstacles. If they pop up along the way, I will deal with them accordingly.

I am always surprised when white Australians ask me if I’m indigenous, or state categorically that I must be indigenous to wish to write about their culture. I see it as a study of cultural interest that I have worked hard to compile into story-time history. I have included an enormous amount of artwork for the purpose of keeping the reader in the picture, so to speak. I hope that my work will become useful in schools for the purpose of raising cultural awareness among our other ethnic groups, especially among the children, and reinforcing pride and self-respect into the minds of Aboriginal students.