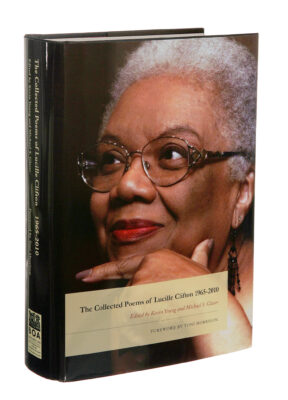 I chose to repeat my blog on Lucille Clifton because those looking for a Christmas present to give may consider her books of poetry. This woman aimed to have Americans realize, through her poetry and other writings, that Blacks made noteworthy contributions in the United States. She is known for the impact her poems make with the fewest words. The New York Times rated her first book of poems, Good Times, one of the best books published in 1969. She writes of survival under arduous circumstances, oppression, politics, women’s lives and family, which is the theme of this blog, Women and Adversity. Her poems like “sorrow song,” “blessing the boats” and “jasper texas 1998” bring tears at the insight she has to inhumanity in our culture. She is quoted as often saying, “In my poems I try to comfort the afflicted and afflict the comfortable.”

Thelma Lucille Sayles was born June 27, 1936 in Depew, New York, near Buffalo. She was the first in her family to graduate from high school. She attended Howard University in Washington, D.C. and Fredonia State Teachers College in New York but didn’t stay to earn a degree.

In 1958 she married Fred Clifton, a philosophy professor. The couple had six children. Lucille worked in state and federal government jobs until 1971 when she accepted a position as poet-in-residence at Coppin State College in Baltimore, MD. During her tenure there from 1972-1974 she published two collections of her poetry, Good News About the Earth in 1972, and An Ordinary Woman in 1974. She was Poet Laureate of Maryland from 1979-85.

She is featured in my ebook, Women and Adversity, Honoring 23 Black Women. It is available at amazon.com and barnesandnoble.com.