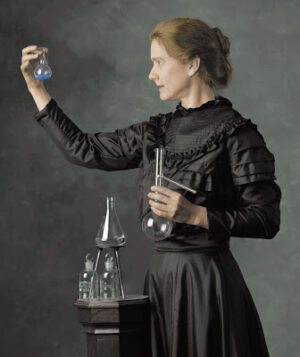 First Person and Only Woman

to Receive a Nobel Prize Twice

Does that perfect gift elude you? Try a biography of one of the most admired women in the world. I posted this blog in May 2021, but Marie Curie is worth reading about again.

She didn’t have the funds to study abroad, so she and her older sister, Bronya, devised a plan. Maria would work while Bronya earned her degree, and Bronya would return the favor. Maria worked for five years as a tutor and governess and studied mathematics, physics, and chemistry before she was able to enroll at the Sorbonne in Paris in 1891. She earned her master’s degree in physics in 1893, and in 1894 earned a degree in mathematics.

She met Pierre Curie, a French physicist and professor in the school of physics at the Sorbonne. The couple married in 1895 and had two daughters. Irène was born in 1897, and Ève was born in 1904. Curie received her doctor of science degree in 1903, and that same year shared the Nobel Prize in Physics with Pierre.

Pierre was killed in a horse-drawn wagon accident April 19, 1906. Marie refused the French government’s offer of a state pension to support her and her daughters, saying she was capable of supporting herself and her children. She went back to work the day after Pierre’s funeral, but on May 13, the Sorbonne offered her the academic post Pierre had held. She accepted, making her the first woman to teach at the Sorbonne. Her dream was to one day establish a science laboratory as a tribute to Pierre.

This woman’s determination and use of her talents helped her reach extraordinary goals. She became known not only as Marie Curie but also as Madame Curie. She conducted extensive research and:

In 1911 Madame Curie won the Nobel Prize in Chemistry, the only person to have accomplished this feat in two different sciences. That year rumors spread she was having an affair with physicist Paul Langevin, Pierre’s former student and a married man with four children. The scandal took a toll on her health.

I featured her in my ebook, Women and Adversity, Recognizing 23 Notable Mothers, available at amazon.com.