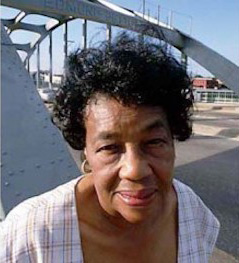 It seems like not much has changed in the past 100 years for Blacks who wish to vote in Alabama. In the early 1960s, Marie Foster, who lived in Selma, tried eight times to get a voter’s card before officials finally issued one to her. Each time she tried to register, a new excuse arose to deny her the privilege.

In order to vote, Alabama residents had to pass a literacy test, but Black applicants had more difficult questions. A Black person might be asked to read and interpret a section of the Alabama Constitution. Another question might be to write down what the test administrator was reading or recite back what was being read. Still another could be to name one area of authority over state militia reserved exclusively to the states.

Foster understood this discriminatory system and decided to take steps to help Black voters. In 1963 she offered other Black people literacy and citizenship classes. Her first class drew one student, a 70-year-old man. She succeeded in teaching him how to write his name. Her efforts, though, began to attract a lot of people, and her classes were filled.

Those classes drew attention from people in power. She was the target in 1964 when Dallas County Circuit Court Judge James Hare prohibited groups of three or more people from meeting to discuss civil rights or voter registration in Selma.

Demonstrations against racial discrimination gained ground, and on March 7, 1965, known as Bloody Sunday, Foster was one of the hundreds of people ready to march the fifty miles from Selma’s Edmund Pettus Bridge to Montgomery. State troopers met the marchers, and one of them clubbed Foster in the knees. She fell but later said of the incident, “I lay on the pavement with my eyes closed. I didn’t move. I stood my ground.”

When the people reorganized on March 9, the police stopped them again. The march finally took place from March 21 to March 25. Foster was one of only two women to complete the march.

President Lyndon Johnson signed the Voting Rights Act on August 6, 1965, which changed practices Foster had encountered, although other methods of voter suppression continue to exist today.

Marie Priscilla Martin was born October 24, 1917, in rural Wilcox County, Alabama. Her mother wanted Marie and her two brothers to go to school, but Marie’s father refused to move away from their remote location, so her mother took the children and went to Selma without him.

Marie married without graduating from high school. She raised three children and was a widow when she decided to complete her high school education. She then went to junior college, became a dental hygienist, and worked for her brother, Dr. Sullivan Jackson.

I feature Foster in my ebook, Women and Adversity, Recognizing 23 Faithful Suffragists.