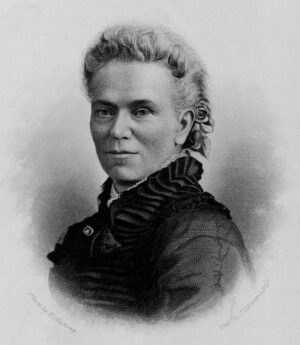 I was a guest blogger on The Lazy Historian, a blog by historical fiction writer Jillianne Hamilton. (https://lazyhistorian.com). Jill is a history buff and  has a segment on her blog titled “Women’s History.” Since my ebook Women and Adversity, Saluting 23 Faithful Suffragists fits the category, Jillianne posted the entry from my book about Matilda Joslyn Gage, a little-known suffragist. The 102nd anniversary of the ratification of the 19th Amendment giving women the right to vote is August 18. Here’s the post from The Lazy Historian.

Books and articles have publicized the activism of Sojourner Truth, Lucretia Mott, Susan B. Anthony and Elizabeth Cady Stanton. I have featured them on my blog, but dozens of other suffragists fought for women’s right to vote as well.

When I wrote my ebook Women and Adversity: Saluting 23 Faithful Suffragists, I included some of these “unknowns.” One of them is Matilda Joslyn Gage. I didn’t know anything about her, but I chose her because my mother’s name was Matilda. It’s amazing what you learn when you delve into the “unknowns.” Gage was from New York, but she has connections to Illinois, my home state. Not only that, her daughter, Maud, married L. Frank Baum. You got it! The author of The Wonderful Wizard of Oz.

Matilda was refused the right to vote in an 1871 election for New York state officials because she was married. (What discrimination!) When she brought single ladies and war widows forward, they were denied the right to vote, too.

This didn’t sit well with Matilda. She was instrumental in having women vote in the 1880 state of New York school board elections.

Although she wanted to be a doctor as her father was, she was denied entry into medical school. Yes, because she was a woman. She was an accomplished writer and wrote “Declaration of the Rights of Women” with Elizabeth Cady Stanton. She helped write the first three volumes of the six-volume History of Woman Suffrage with Susan B. Anthony and Stanton, but she was considered a radical by the prominent suffragists, who distanced themselves from her.

How radical was Matilda?

She founded the anti-church group Women’s National Liberal Union, but it folded for lack of support.
She died in Chicago in 1898.