Queen of England from 1952-present 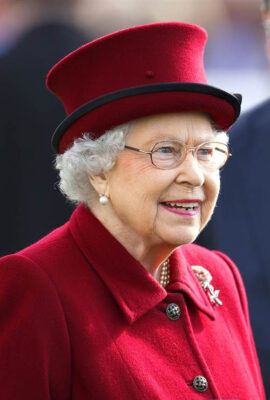 Although most people refer to Queen Elizabeth II as the Queen of England, she is actually Queen of the United Kingdom and 14 other commonwealths. She follows strict rules of protocol, the British Constitution and the Church of England, so imagine her distress when her family doesn’t follow suit, especially since three of her four children are divorced. The Church of England did not relax its rules on divorce until 2002. Then in 2019 2nd son Prince Andrew is accused of sexual abuse, and in 2020 grandson Prince Harry steps back from his royal duties and moves to North America. That’s a lot of adversity for this nonagenarian.The Queen is the longest-reigning monarch in the world and celebrates her Platinum Jubilee, the 70th year on the throne, the “weekend” of June 2-5. No other British monarch has ruled this long.

Some facts:
• Born a princess on April 21, 1926 in London. She will turn 96 next week.
• Her father was crowned King George VI after his brother King Edward VIII abdicated to marry twice-divorced American Wallis Warfield Simpson. As Head of the Church of England, which did not support divorce at the time, the king had to abdicate or not marry her.
• Her sister Princess Margaret was four years younger. She had no other siblings.
• She married Prince Philip of Greece and Denmark in 1947 at Westminster Abbey. They were third cousins.
• She ascended to the throne when her father died in 1952. She was 25.
• She had two children before she became Queen: Prince Charles in 1948 and Princess Anne in 1950.
• Two more children arrived later: Prince Andrew in 1960 and Prince Edward in 1964.
• Prince Philip died April 9, 2021, two months short of his 100th birthday.

What DON’T you know about Queen Elizabeth II?
• She never went to college and has been criticized for her lack of formal education.
• She had private tutors and basically was homeschooled, but British royals MUST
know a foreign language. QE II speaks fluent French.
• During WWII she was part of the Women’s Auxiliary Territorial Service and learned to drive ambulances and trucks, rebuild engines, change tires and do other mechanical tasks.
• As queen she MUST remain neutral politically and never make public statements.
• She was an accomplished equestrian and continues to breed racehorses.
• She loves the Corgi breed of dogs and has owned 30 over the years.
• She can choose her successor.

Best books:
The Queen: A Life in Brief by Robert Lacey
The Queen by Ben Pimlott