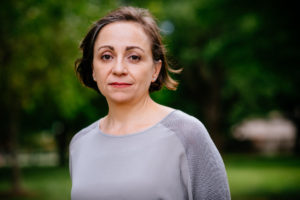 Rajia Hassib’s first novel, In the Language of Miracles, is about an Arab-American family dealing with their son’s arrest for rape. In an interview she says she wanted to explain what it’s like to be Muslim in post-9/11 America. Hassib came to the U.S. from Alexandria, Egypt when she was 23. She studied architecture at University of Alexandria but wanted to be a writer. She and her husband moved around the U.S. until they settled in Charleston, W.V. where they live with their children.

She explains her writing journey and her persistence, which gives others writing their first novel the courage to continue on their own journeys.

Since Hassib’s answers are comprehensive, I’m posting them in two parts. Here is Part I of this two-part blog.

JAM: What was the biggest obstacle you faced when you were writing In the Language of Miracles?

RH: An earlier draft was my master’s degree creative thesis. I had gone back to college at age 32 to change careers, abandoning my BA in architecture and pursuing, instead, a BA and MA in English, all to learn how to write a novel.

At the time of writing the novel, I was juggling a full-time MA class load, teaching two college-level composition classes, and caring for my two young kids. Time management was an incredible challenge——I remember writing entire chapters of the novel while my kids were taking music and tennis lessons, for example, sitting in my car by the tennis court and typing.

In addition to this, I had an almost debilitating amount of insecurity: I was trying to write fiction in English, a language I started learning in Egypt in fourth grade, after both German and my native Arabic. I believe that, had I considered the realistic odds of ever succeeding in finishing a novel, let alone publishing it, I probably would never have even tried. But I was desperate.

Becoming a fiction writer had been my persistent, aching dream since childhood. And I had an incredible amount of help from professors, who kindly and constantly encouraged me, and family members, who helped me take care of the kids and make time for my work and studies. Looking back, it seems as if the lack of time and the language barrier should have made it impossible for me to write this novel. But, at the time, I didn’t really pause to consider the realistic odds, which I think was key to finishing that novel. I just knew I had to do it, so I did.