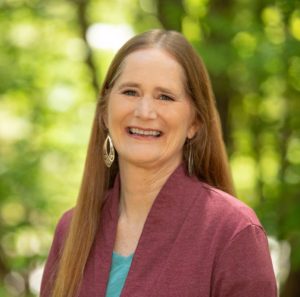 Rebecca Hodge wrote her debut novel, Wildland, while working full-time as a clinical scientist. She says, “As a result, my writing was heavily concentrated on the weekends!”

Hodge was born in Ames, Iowa. The family moved three months later to Ohio where they lived until Rebecca was seven. They finally settled in Raleigh, North Carolina. She earned a bachelor of science degree in Animal Science from North Carolina State University. Since she predates the North Carolina Veterinary School (her words, not mine!), she spent four cold years at Ohio State University where she received her Doctor of Veterinary Medicine.

She was a 2017 finalist in Women’s Fiction Writers Association Rising Star Contest and Rocky Mountain Fiction Writers’ The Colorado Gold Writing Contest. Her short stories have appeared in literary journals that include The MacGuffin, Blue Lake Review, and Big Muddy.

She and her husband raised three sons and have filled their empty nest with two rescue dogs.

LA: As someone who has been writing for many years and active in the writing community, you are well aware of the common hurdles writers face. What was an uncommon obstacle you ran into?
RH: When I first framed up the character of Kat, the main character of Wildland, I was startled to find myself considering the possibility that she was dealing with breast cancer. This cut close to the bone—I was diagnosed nine years ago with bilateral breast cancer—and I wasn’t sure I wanted to immerse myself in Kat’s worries for the years it takes to finalize a book. Ultimately, I decided to forge ahead, and I’m glad I did. I think the cancer adds an important dimension to Kat’s struggle, and hopefully my personal experience helped me provide an empathetic portrayal.

LA:  Using a forest fire is a unique plot event. What obstacle(s) did you come across when developing/incorporating this into your story?
RH: I did a lot of reading about forest fires—the ways they move, how birds and animals react, common approaches for firefighting—in order to try and be as accurate as possible. But from a writing standpoint, I think the biggest challenge was trying to avoid repetitive language. The fire is a prominent entity, present for more than half the book, and I didn’t want the reader to tire of the descriptions. In the end, I think every adjective remotely related to fire appears in the book somewhere.

LA: Women’s Fiction has many shades of definition. What is, in your opinion, the obstacle that prevents a unified definition from being agreed upon?
RH: The term ‘Women’s Fiction’ is used by publishers and agents, but it is not commonly used by the reading public. You don’t find a ‘Women’s Fiction’ section in bookstores or libraries, and many people are less than pleased with the sexism implied by the term. There is general agreement that books in this category focus primarily on the emotional journey of the main character, but there is less consensus once you get past that point. Does the main character have to be female? Does the author need to be female? Is the book only intended for female readers? The term is helpful when interacting with the publishing community, but many people prefer to use the term book club fiction when talking to readers.