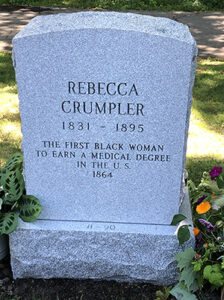 I happened to come across an article in 2020 about a fundraiser to buy a headstone for Dr. Rebecca Lee Crumpler. I had never heard or read about this woman, and I wondered how the first Black woman medical doctor in the United States could be overlooked for more than a century. She is often mistaken for Rebecca Cole, the second Black woman medical doctor. Even pictures of Cole are identified as Crumpler, but no picture of Crumpler exists.

Crumpler was born Rebecca Davis on February 8, 1831 in Christiana, Delaware to Absolum and Matilda (Webber) Davis; however, she was raised by an aunt in Pennsylvania, who attended to sick people. Recognized for being an intelligent girl, Crumpler was accepted in the West-Newton English and Classical School in Massachusetts as a “special student.” In 1852 she moved to Charlestown, Massachusetts and worked as a nurse. In 1860 she applied to the New England Female Medical College in Boston, was accepted and graduated in 1864.

She had married Wyatt Lee in 1852, but the man died of tuberculosis in 1863. On May 24, 1864 she married former fugitive slave from Virginia Arthur Crumpler. She began practicing medicine in Boston but when the Civil War ended, the couple moved to Richmond, Virginia where Crumpler worked through the Freedmen’s Bureau to care for freed slaves. Arthur was a blacksmith.

Of course, Rebecca encountered prejudice on many levels from being denied access to hospitals to having pharmacists refuse to fill her prescriptions The couple returned to the Beacon Hill neighborhood of Boston in 1869, probably because the prejudice in the South was nearly unbearable. Arthur then became a porter while Rebecca practiced medicine.

In December 1870 they had a daughter, Lizzie Sinclair Crumpler. No records are available, but the girl most likely died before she turned ten since she is not mentioned in the 1880 census with her parents. That year the couple moved to the Hyde Park area of Boston.

Rebecca didn’t practice medicine very much from then on, but in 1883 she published A Book of Medical Discourses in Two Parts about medical care for women and children.  She died March 9, 1895 at age 64 of fibroid tumors. Arthur, who had taught himself to read and write died May 8, 1910. No accurate birthdate was available, but he was born sometime during the 1830s. The couple were buried in Fairview Cemetery but did not have gravestone markers.

In 2020 the Friends of Hyde Park Library and Hyde Park Historical Society started a fundraiser to buy appropriate headstones for the couple.  On July 16, 2020 a ceremony was held to dedicate the headstones of the couple.

Want to read more about her?