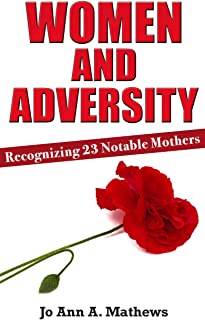 Some mothers of famous people:

Others women who earned the title of Mother:

Some of the women have gone unnoticed by most:

Mother’s Day has been a holiday in the U.S. since 1914 when President Woodrow Wilson declared it to be celebrated the second Sunday in May. Anna Jarvis, also featured in the book, was the motivating force behind the holiday because she wanted to honor her mother, another featured mother in the book, who had hoped someone would establish a day for mothers.

The brief sketches in Recognizing 23 Notable Mothers are not biographies. They can be study guides for students, prompts teachers use to help motivate students, and fascinating reading for book lovers. It is available at amazon.com, barnesandnoble.com, apple.books.com, kobo.com, and goodreads.com. Also available at these platforms is the first in my Women and Adversity series, Women and Adversity, Honoring 23 Black Women.