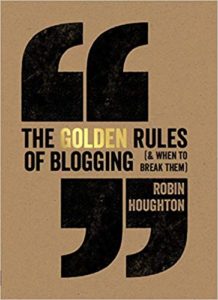 The Golden Rules of Blogging by Robin Houghton

In Part I, British writer Robin Houghton explains how she tried for 30 years to get her poetry published and finally succeeded in 2010. She now has about 100 poems published, has won several poetry prizes and is included in “The Best New British and Irish Poets 2017.” A dedicated blogger, she has written three books on blogging and two ebooks on how to use Twitter. I kept the British spelling Robin uses.

JAM: What obstacles did you face before “Blogging for Writers” was published?

RH: “Blogging for Writers” was actually the second book I wrote, and it was commissioned off the back of “Blogging for Creatives” (Ilex/F&W 2012). “Blogging for Creatives” had been thought up by the publishers, and someone who knew me on Twitter asked if I’d like to write it. I almost said no – because I didn’t think I could write a whole book, having only written short-form pieces prior to that. So once again the biggest obstacle was in my own head – lack of confidence. It was only when a colleague said, “If you don’t write it, I will!” that I realised it was stupid to turn down the opportunity. Looking back, I was also heavily involved in looking after my mother who had dementia, and both my husband and I were working full time, trying to pay off a mortgage and plan for the future. All of this may have contributed to my indecision.

RH: I would like to write more books. I enjoy the scale of a book project and the discipline of delivering to deadlines. My agent is always nudging me to come up with another book idea, but I am pigeon-holed in the sense that publishers only see me as someone who writes about blogging and social media, whereas I know I could get behind any number of fascinating non-fiction genres, such as biography or even how-to books on other topics. I’ve had a lot of good fortune in poetry, and the only obstacle there is probably the size of the competition. Creative Writing Masters degrees are big business in the UK, and more are starting up all the time – all those graduates are producing new work, and it gets harder and harder to get a publishing deal.

But having crossed the first hurdle of having a couple of chapbooks out there, I feel less anxious about having a full collection published. Although that would be wonderful. And the marketer in me is still seeing opportunities. I recently wrote a short “Guide to getting published in UK Poetry Magazines” for other poets, and I was amazed how popular it was. It sounds a little smug and it’s not meant to, but I truly feel I live a blessed life. I survived cancer three years ago. I have a supportive husband, all the time I need to write and a lovely network of writer friends.