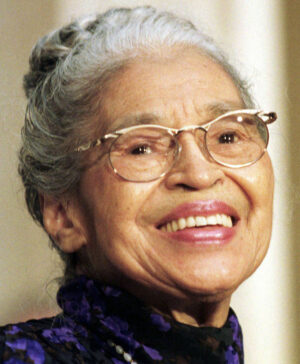 On December 1, 1955, Rosa Parks of Montgomery, Alabama, refused to give her bus seat to a white passenger. She was arrested because it was the law that Black passengers cede their seats to white passengers. She lost her job and received countless death threats, but her action initiated the Montgomery Bus Boycott and the modern Civil Rights Movement.

The boycott of the municipal bus company began December 5, 1955, and continued for 381 days. It ended December 21, 1956. The U.S. Supreme Court declared Montgomery’s segregated seating unconstitutional and refused to hear appeals. It issued an order to Montgomery on December 20 to integrate the buses.

Parks had experienced racial discrimination from the time she was a child. She remembered hearing a lynching one night and thought their house would burn down. Her grandfather once held a shotgun in front of their house as Ku Klux Klan members marched down the street.

Rosa McCauley was born February 4, 1913, in Tuskegee, Alabama.  Her maternal grandparents were both former slaves. She married Raymond Parks, a barber, in 1932, and he encouraged her to get her high school diploma. She then made her living as a seamstress. The couple had no children.

* I will write about the tornado that hit our house February 15 in a future blog.