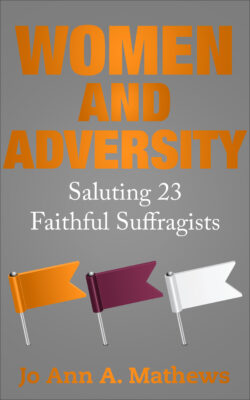 Not all of the early suffragists in America believed in equal rights for Black women. When they held meetings, rallies and marches, they didn’t invite their Black allies. They didn’t allow them to march shoulder-to-shoulder with White women. Instead, Black women had to have their own contingent at the end of the parade or at the end of the march.

Black women, though, played key roles in fighting for equal footing. Some of them are featured in Women and Adversity, Saluting 23 Faithful Suffragists.

This third ebook, meant to commemorate the 100th anniversary of the 19th Amendment to the Constitution which gives women the right to vote, follows the same format as my two previous books: Honoring 23 Black Women and Recognizing 23 Notable Mothers. The entries in all three books are brief sketches not biographies. They are meant to motivate readers to learn more about these women. Students may want to write a research paper on one of them, and teachers may recommend students get a copy to prompt them to learn more about these women. Book lovers can be fascinated by the achievements of these women.

All three books are available at amazon.com, barnesandnoble.com, apple.books.com, kobo.com, and goodreads.com.