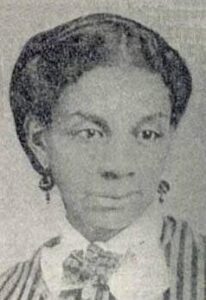 Sarah Jane Smith Thompson Garnet argued that it was undemocratic to deny women the vote because they “had the same human intellectual and spiritual capabilities as men.”

Garnet had a distinguished career as an activist and an educator. She was a teacher’s assistant when she was fourteen years old. In 1854 she taught at the African Free School of Williamsburg, New York, now part of Brooklyn, New York. In 1863 she was appointed principal of Grammar School No. 4, the first Black principal in the New York public school system. She then became principal of Public School No. 80 and remained in that position until she retired in 1900. She advocated for Black teachers throughout her career and fought for equal pay for equal work.

Sarah Jane Smith was born July 30, 1831 in Queens County, New York, the first of 11 children. Her parents, Sylvanus and Ann Smith, claimed Native American heritage as well as African and European roots. The family made a good living from farming. Sarah’s grandmother taught her elementary school subjects until Sarah went to New York public schools, where she was tapped for the teaching assistant position. Sarah’s sister, Susan Smith McKinney Steward, was the first Black woman in New York State to earn a medical degree.

Sarah married James Thompson (sometimes referred to as James Tompkins). Their two children did not live to adulthood. Sarah continued her career in teaching, and from 1883 to 1911 she also owned a seamstress shop in her home. James died in the late 1860s, and Sarah married the abolitionist Henry Garnet in 1879. Henry became ambassador to Liberia, but the couple had separated, so he went there alone. He died in Monrovia in 1882. Sarah then became even more active in the suffrage movement.

She and her sister Susan founded the Colored Women’s Equal Suffrage League of Brooklyn in the late 1880s, which became affiliated with the National Association of Colored Women (NACW). Garnet advocated for civil rights and equal rights for all people, and the Equal Suffrage League invited White suffragists to its meetings. On the other hand, White suffragists ignored and excluded Black suffragists from their ranks. As a member of the NACW, Garnet was head of the suffrage division. She educated members about women suffrage, distributed literature, and gave speeches.

In 1911, Sarah and Susan went to the University of London to attend the first meeting of the Universal Races Congress. Steward presented a paper titled “Colored American Women.” When the sisters returned, the Suffrage League held a welcome reception on September 7 at Garnet’s home, and the two discussed what they had learned in London.