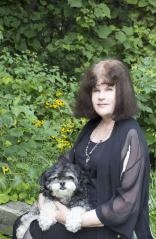 In Part I Sharyn McCrumb answered my question about the research she does (See it at jamathews.com/blog). This post gives some biographical information and answers to the other questions I asked.

Ms. McCrumb graduated from University of North Carolina at Chapel Hill and earned her master’s degree from Virginia Tech. She lives in the Virginia Blue Ridge area and sent a picture of herself with her dog. She explains her pet is a Maltipoo, and his name is Arthur “because we got him on the Winter Solstice, which in the folklore of old Britain was called ‘The Light of Arthur’ after King Arthur. His mother was a Maltese and his father a miniature poodle,” she adds. “He does not seem to realize how many generations there are between him and a timber wolf, but fortunately he never catches anything.”

JAM: Did you face any obstacles when you wanted to publish Sick of Shadows, the first in your Elizabeth MacPherson series?

SMC: I faced no obstacles at all in getting my first novel published, but that novel, that series, is not germane to the work I have been doing for the past 25 years. I wrote the Elizabeth MacPherson novels while I was in grad school. Once I completed my degree, I turned my attention to serious and substantial novels exploring the history and folklore of the mountain South. It is those later books, the Ballad novels, that were New York Times bestsellers and are taught in schools and universities.

JAM: What was the biggest obstacle you faced through your writing career?
SMC: I really don’t think in terms of obstacles. I figure out what message I want to convey, and write the book with as little interference as possible from the publisher. In the early days, I felt their cover choices did a disservice to the books, but eventually I won that battle.

JAM: What obstacle/s do you face now as a writer?
SMC: Feeling like Boxer in Animal Farm. Publishers expect authors to do 95% of the work for 8.5% of the money. They want a book a year, plus touring and tweeting and blogging while researching the next book, due next year. If you try to maintain that pace, one of two things will happen: 1) your health will fail; 2) the quality of your work will suffer tremendously. Publishers do not care about either eventuality. Their attitude toward authors is similar to that of McDonald’s toward cows: while they are indispensable to the business, the fate of any one of them is insignificant to the corporation.