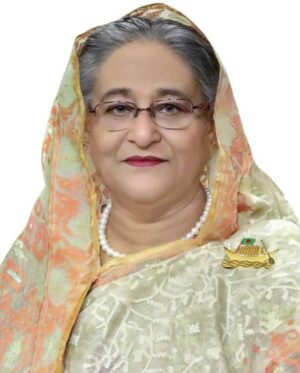 I have primarily featured women writers on my blog, but I’m shifting gears here and want to highlight women in politics, focusing on women around the world who are heads of state.

Sheikh Hasina (pronounced Shake Hah-see′-nah) was elected Prime Minister of Bangladesh four times and has experienced assassination attempts, imprisonment and exile. That’s a lot of adversity! Her history includes moving from a firm belief in democracy to accusations of autocracy, corruption and violence.

Bangladesh is located in southern Asia and didn’t become an independent country until 1971 when it separated from Pakistan. Hasina’s father Sheikh Mujibur Rahman is considered the founder of Bangladesh and served as its first president from 1971 until he, his wife, three of his five children, other relatives and members of his household were assassinated August 15, 1975.  Hasina and her sister, Sheikh Rehana, were in West Germany at the time of the attack.

Bangladesh has experienced violence and upheaval since its inception, but Hasina immersed herself in politics and was determined to make Bangladesh a democratic country. She was elected Prime Minister for the first time in 1996 but was defeated in 2001. She regained the post in 2008, was reelected in 2014 and again in 2018, although accusations of fraud and corruption have tainted this latest election.

Some of her achievements as prime minister:

After a long illness, Hasina’s husband died in 2009. The couple have two children, son Sajeeb Wazed, a businessman, and daughter Saima Wazed, an autism activist.