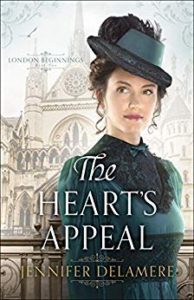 Women and Adversity:  The Heart’s Appeal

Jennifer Delamere strikes another hit with The Heart’s Appeal, the second in her London Beginnings Series. Set in Victorian England, this inspirational romance shows Julia Bernay as a determined, independent woman striving to become a doctor when that field was not readily available to women. Her ultimate goal is to be a missionary in Africa and minister to those people’s medical needs as well.

The novel begins with Julia using her medical knowledge to save the life of Michael Stephenson in a Metropolitan Underground Railway accident. After people go their separate ways, Julia seeks to find out how Michael, a respected barrister with career goals of his own, is recovering. When Julia learns he is an expert in Latin, she asks him to tutor her so she can pass the Latin part of the London University’s matriculation exam, necessary to take courses at London School of Medicine for Women. Michael agrees out of gratitude to Julia for saving his life. The two become close and are obviously attracted to each other. Michael’s sister, Corinna, however, pushes his interest to rich socialite, Laura Maynard, a match Michael considers.

Complications of family, the law, women’s acceptance as medical doctors and family histories are intricately woven together to produce an engrossing story. Emphasis on women’s independence and women’s rights are part of the story as well. Julia’s compassion and ardor for helping people and her devotion to Christian principles demonstrate her strength of character.

Among the supporting characters who add color and depth are Corinna and David Barker, Laura Maynard, Dr. Hartman, Mr. Noah Tamblin, Lady Edith Morton and Julia’s sister, Cara, plus the people from Bethnal Green. Ms. Delamere includes two characters who actually lived: Dr. Elizabeth Garrett Anderson, the first woman to qualify as a physician and surgeon in Britain, and George Müller, an evangelist and director of the Ashley Down orphanage in Bristol, England. The research needed to include specific information is impressive.

The Heart’s Appeal keeps the reader’s interest to the very end because of the characters and engaging interrelates subplots.

No release date has been announced for the next in the series, The Artful Match, which concerns the other sister, Cara.