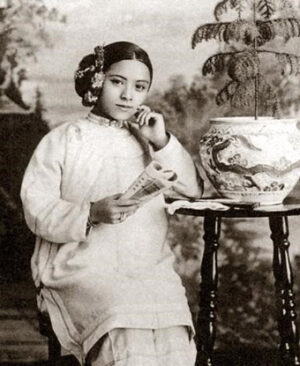 Tye Leung was born August 24, 1887 in San Francisco’s Chinatown, the youngest of eight children of Chinese immigrants. Her parents had arranged a marriage between Tye’s sister and an older man in Montana, but her sister ran away with her boyfriend, so her parents decided to have Tye marry the man. To escape this fate, Tye, who was between twelve and fourteen years old, took refuge in the Presbyterian Mission Home.

At the Mission, Donaldina Cameron, who helped Chinese immigrant women escape prostitution and servitude, accepted Tye and nurtured the teen. Tye learned English, studied Christianity, and became an interpreter at the Mission. Cameron recommended Tye take the civil service examination, and she became the first Chinese American to pass the test and become a federal employee.

In 1910 Leung worked at the Angel Island Immigration Station in San Francisco as a matron and translator in the women’s quarters, and Charles Schulze was an Immigration Service inspector. The couple fell in love but were not allowed to legally marry in California because a law from 1850 banned people who were Black, Filipino, or Asian from marrying White people.

In 1912 Leung earned another first. She made headlines for being the first Chinese American woman to vote in a primary election. The California legislature passed a law in 1911 allowing women the right to vote. When a reporter asked about the experience, Leung said:

My first vote?—Oh, yes I thought long over that. I studied; I read about all your men

who wish to be president. I learned about the new laws. I wanted to KNOW what was

right, not to act blindly. I think the American ladies are like that too. For everywhere I

heard talk about the election and the candidates. I think we should learn, not vote blindly,

since we have been given this right to say which man we think is the greatest.

When the couple returned to San Francisco, they understood that because of discrimination they’d be forced out of their jobs. Charles took a job at the Southern Pacific Railway Company and later at the Columbia Gramaphone Company. Tye was bookkeeper at the San Francisco Chinese Hospital, and in 1926 took a job working the night shift as a telephone operator at the Chinatown telephone exchange where she stayed for twenty years. Her invaluable talent lay in being a translator for Chinese immigrants and residents of Chinatown in San Francisco.

The Schulzes had four children: Frederick, Theodore, Louise, and Donaldina. When Charles died in 1935, Tye continued her job at the telephone company and as an interpreter. She increased her efforts to advocate for Chinese immigrants and remained active in the Chinese American community throughout her life.