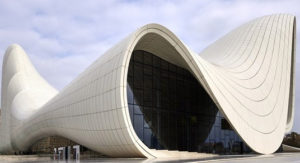 Zaha Hadid advanced the contributions of women worldwide during her lifetime. She is quoted as saying, “Women are always told ‘you’re not going to make it, it’s too difficult, you can’t do that, don’t enter this competition, you’ll never win it.’ They need confidence in themselves and people around them to help them get on.”

Some of her accomplishments

Zaha Hadid was born in 1950 in Baghdad, Iraq of a wealthy family. Raised Muslim, she attended a private school where nuns taught in French. Mathematics was her course of study at American University in Beirut then in 1972 she enrolled at Architectural Association School of Architecture in London and later became a British citizen. She opened her own architectural firm in 1980 and also taught at Harvard Graduate School of Design, University of Illinois at Chicago’s School of Architecture and other places.

Known for her futuristic designs, Ms. Hadid won several awards and is often quoted as saying that there are 360 degrees and sees no reason to restrict herself to just one.

She attributed her many setbacks and resistance to her designs to being a woman and a Muslin, but she told London journalist Rowan Moore, “I am eccentric, I admit it, but I am not a nutcase.” Many of her award-winning designs were never constructed. The Peak in Hong Kong, described as a horizontal skyscraper, and the Cardiff Bay Opera House in Wales are examples. She briefly considered giving up but was determined and persistent. “Your success will not be determined by your gender or your ethnicity, but only on the scope of your dreams and your hard work to achieve them,” she said.

Vitra Fire Station in Weil am Rhein, Germany completed in 1993 is the first major project she designed that was built. Now her designs span the globe.

She designed the Tokyo Olympic Centre for the 2020 games, but she will not see it built because she passed away in Miami of a heart attack in 2016 at the age of 65, never having married or having children.